When we first met with Dr. Dodman to address Bella's aggression towards Jan, we were most concerned, rather obviously I suppose, with the aggression aspect. But in our dissection and discussions, our researching and reading, our observing and opining and (Oh I'm sorry, are you still reading this? Bella tells me she's gone out for coffee and returned by now.... Moving on...)

My point was, as we started thinking things through, we were able to come up with patterns and identifiers as to when Bella was going to short-ciruit on us. And it was all, drum roll please: fear/anxiety-based.

This isn't a huge revelation, to us or the veterinary/behavioral profession. Most aggression in dogs is fear-based. But while we were focusing on her aggression, we weren't paying attention to the effects fear and anxiety were having on her temperament. The "Fly Incident" made us all re-focus on what was sending Bella over the cliff rather than just focusing on the cliff itself.

And thankfully Dr. Dodman had one more tool in his pharmaceutical toolbox for us: Clonidine.


We had been giving Bella Clonidine on an 'as needed' basis for thunderstorms since we first started seeing Dr. D. He now recommended we try giving it to her every day to see if it helped with her anxiety. We had a .2 mg Rx for Bella to handle thunderstorms already with the instruction to give 2 - 4 tables up to twice a day. HA! HAHA!

We made the mistake of giving Bella 2 tablets twice in a day during the "Snowtober" storm of 2011 shortly after first getting the prescription from Dr. Dodman. It worked but the second dose worked so well, Bella actually wet the bed while she was sleeping she was so sedated by it. NOT what we were looking for. Poor drugged baby dog.

So this time, after a bit of discussion with Dr. D, we started by giving Bella 1 tablet in the morning and 1 tablet just before going to bed.

Unfortunately, Clonidine only works for about 4 - 6 hours and we found we had a considerable gap in the late afternoon/evening time-frame. We also noticed that giving Bella a whole Clonidine in the morning just left her sleepy (a positive for its continued use in the evenings however).

We needed to balance out the fact that she was sleepy in the morning but still anxious by the evening. We found giving her 1/2 a table with her breakfast, 1/2 a tablet with her dinner and then a whole tablet just before bed seemed to offer us the greatest benefit.

It took a few weeks for her to adjust to it but every week as we took her to agility class, our trainer Carolyn could see more and more improvement. Seeming a little sluggish in the first few weeks Bella was gradually getting back to her spunky self just without all the anxiety attached.

It has turned out to be our miracle drug.

For the first time in her entire life with us, Bella wasn't running from the room at the drop of a pine cone. She wasn't trembling at the sight of trees blowing in the wind. And, finally, it seemed, Bella was going to earn her "Sato ears".

Satos in general have ridiculously big ears and they tend to either stick out to the side of their heads or straight up. Honestly, I can often identify a Sato from a block away just for their adorable, crazy ears but Bella never had them. Her ears were so often pinned back to her head due to stress and anxiety, I didn't even realize she should have them. I just assumed her ears were supposed to be that way.

Until she started on the Clonidine and her Sato ears began making appearances.

Just occasionally at first but more and more over time. Bella's ears don't always stick straight up, they are floppier like a Labs ears but more and more often I have found them sticking out to the side or popping up in the air. They are so freaking cute.

But what really has me over the moon is that it is not just something we think we're seeing in her behavior that proves she's feeling better. We can actually see in her physical appearance that Bella has moments in life now where she's not scared. That may sound extreme to someone who hasn't lived with a fearful dog and it probably makes us sound oblivious and stupid to not have realized earlier just how much distress she was in. But if all you've ever seen are flat-back ears, how do you even know there's anything different to work towards?

Bella's progress since adding the Clonidine has been extraordinary. She still has some cranky moments but a few weeks ago Jan did something she didn't like (he might have stepped on her foot, I think) and she barked at him. That may seem inappropriate to anyone with a 'normal' dog but it was an enormous step forward for us. I believe dogs have a right to tell us when we're doing something they don't like. And that's exactly what Bella did.

She didn't overreact from living in constant distress with a hair-trigger temper. She barked. I'd have been happy with a growl. She didn't lunge. She didn't bite. She barked. She's learning that she has a voice and it will be respected and listened to. She's beginning to understand she doesn't have to fend for herself and treat every transgression as a life-threatening attack.

Without medications, I don't think we would have ever been able to bring Bella to this point. We would never have gotten her "below threshold" so we could teach her more appropriate ways to react, improve her confidence and see those Sato ears. We are still figuring so much out about her and she is still growing by leaps and bounds to our utter amazement. I will never trust her to be alone with a child, that's a given, but I am so proud of how far she has come. 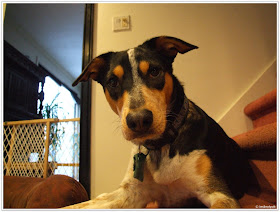 I'm sure there are people who think medicating dogs for fear and anxiety is a cop-out, a quick-fix in a world that seems too dependent on instant gratification and simple solutions. I believe I waited too long to help Bella because I was worried about exactly that: worried I was seeking easy answers to complex problems. I can tell you this, none of this has been simple. And after a year and half of working with behaviorists, trainers and vets, it has certainly not been a quick fix. But it has been a life-saver.

Bella will never be a social, out-going dog. But last week we took her to a major city animal hospital and she survived both the waiting room and being handled by any number of staff with, if not aplomb, at least a modicum of dignity. She is a smart, sweet dog who just needed a little patience and understanding to bring out the best in her and we are thrilled at her progress.

We have experienced any number of milestones in the last year with her that I hope to relay in future posts. Bella's story is a long way from over but I hope you've enjoyed reading about her journey thus far. I know I'm looking forward to seeing what she's going to do next.